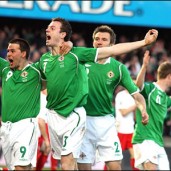 Bosnia, Herzegovina and Hungary will be competitors of Ireland national team in the final period of preparations for the European Championships, which from June 8 to July 1 will be held in Poland and Ukraine.

The Ireland national team will play with Bosnia and Herzegovina on May 26 at Aviva Stadium in Dublin and with Hungary on June 4 in Budapest. Between these meetings they will stay at a training camp in Montecatini in Italy.

During the championships the players of the Italian coach Giovanni Trapattoni will stay in the “Sheraton” hotel in Sopot, and they will train at the Municipal Stadium in Gdynia. They will arrive to Poland on June 5.

During the European Championships Ireland will play in Group C with Croatia and Italy (10 and 18 June in Poznan) and Spain (14 June in Gdansk).