The ‘NEVER AGAIN’ Association, which runs the campaign ‘Let’s Kick Racism out of Stadiums’, held an online debate on fighting antisemitism and bigotry at stadiums in Poland and Europe.
Antisemitism continues to be a serious issue, both inside and outside football stadiums, in Poland and worldwide. However, more often than not it is also glossed over by football associations and the media. Participants in the debate presented the results of the international educational project ‘Changing the Chants’, conducted in cooperation with Anne Frank House (Amsterdam, Netherlands) and two football clubs: Borussia Dortmund and Feyenoord Rotterdam.

The debate was opened by Dr Rafal Pankowski, professor at Collegium Civitas and co-founder of the ‘NEVER AGAIN’ Association and Football Against Racism in Europe (FARE) network.
Hate crimes at Polish stadiums were discussed by Dr Anna Tatar, co-author of the ‘Brown Book’ and a member of ‘NEVER AGAIN’. – ‘Antisemitic flags, symbols and chants have been used by football hooligans for many years with little or no punishment. What is striking is the failure to react from football authorities, club boards and city governments, which provide financial support and facilities to football clubs’ – she said.
Dr Wojciech Wozniak of the University of Lodz presented the results of the ‘Changing the Chants’ project. Its objective is to understand the role of non-formal education provided by sports clubs in combating antisemitism. Good practice developed on the basis of experiences and collaborations with clubs from various countries will allow the creation of friendly and open football fan communities in Europe and beyond. The project received support from the EU programme ‘Rights, Equality and Citizenship’.
Later in the debate, the floor was taken by Dr Maciej Kozlowski, former Polish Ambassador to Israel and author of the book ‘Chosen People – Cracovia Cracow: The Multi-Cultural History of Polish Sport’ (published by ‘NEVER AGAIN’ in 2015). He discussed the role of Jews in Polish football, their contribution to the development of the sport, and involvement in establishing the first Polish clubs and competitions. He also provided examples of Polish players with Jewish origins: Jozef Lustgarten, Ludwik Gintel and Leon Sperling, all of whom were successful members of the Polish national team.
The discussion was summed up with observations on the rise of antisemitism and xenophobia by Dr Sebastian Rejak of the American Jewish Committee – Central Europe Office.
The discussion was organized by the ‘NEVER AGAIN’ Association in partnership with the Fare Network and AJC – Central Europe.
This year, the ‘NEVER AGAIN’ Association celebrates 25 years of activity. ‘NEVER AGAIN’ is an independent anti-racist organization founded in Warsaw in 1996, which has campaigned against antisemitism, racism and xenophobia, and for peace, intercultural dialogue and human rights both in Poland and internationally. 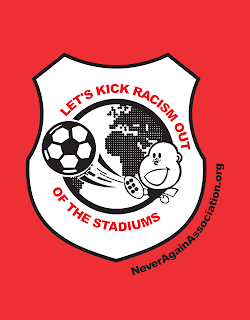 The campaign ‘Let’s Kick Racism out of Stadiums’ was a brainchild of the late Marcin Kornak (1968-2014), who chaired ‘NEVER AGAIN’ for many years. ‘Let’s Kick Racism out of Stadiums’ has run since the mid-1990s with the aim to combat racism and discrimination at stadiums. One of its main components is monitoring and reporting of hate crimes and hate speech cases.
‹ Previous Post Next Post ›