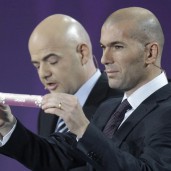 Unlike the World Cup, there are no predictable matches — which makes the European Championship the most competitive of all major tournaments.

Group of Death a Thousand Times Over: B.
Group of Near-Death Experience: C.
Group of Megadeath Concert: D.
Group of Spiritual Death: A.

Reigning champion Spain will be tested. England can’t have many complaints. Ireland has a brutal task ahead.