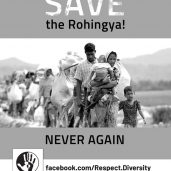 An international sports boycott of Myanmar was debated during a discussion led by a representative of the ‘NEVER AGAIN’ Association in Seoul.

On 23-25 August 2019, ‎human rights activists from across the world gathered at the conference on ‘Protection of Rohingya Survivors and Accountability for Genocide’ held at the Sogang University, one of the leading universities of South Korea, established by the Jesuits. The opening keynote speech was delivered by Professor Yanghee Lee, the UN Special Rapporteur on the human rights situation in Myanmar.

Co-founder of the ‘NEVER AGAIN’ Association Rafal Pankowski chaired the conference session ‎on ‘Travel, Culture and Governmental Relations’ which discussed the international campaigns to end genocide against the Rohingya, a predominantly Muslim minority in Myanmar.

– ‘The newly announced initiative of ASEAN (Association of South East Asian Nations) to organize a future football World Cup in Southeast Asia is an interesting opportunity for the promotion of the region, but the ongoing atrocities in Myanmar make it currently next to impossible for the proposed bid to have any credibility from the human rights perspective’ – noted Rafal Pankowski. – ‘Football can be a positive tool for peace and intercultural understanding, but FIFA must not legitimize human rights abuses. The same applies to the idea of Myanmar as a co-host of the U-20 World Cup in 2021.’

The meeting was co-organized by Korean civil society groups together with the Free Rohingya Coalition, FORSEA (Forces of Renewal of South East Asia), EuroBurma Office and Human Rights Action Centre. It was attended by over one hundred participants, including a large group of Catholic nuns and ended with a joint Buddhist-Christian-Muslim demonstration outside of the Myanmar embassy in Seoul.