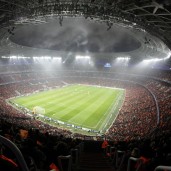 The National Stadium in Warsaw which has a capacity of 60 thousand seats will be built in the place where at present is the 10th Anniversary Stadium. According to current conception the National Stadium is expected to be the main element of a sports-recreational centre.

The National Stadium is expected to be one of the main centres of the European Football Championships Euro 2012, where according to the original scheme it will be played among others: the opening match, some of the group matches, one quarter-final and one semi-final.

Poznan City Stadium opening ceremony was inaugurated on Monday evening, 20 September with a Sting concert. This is the first stadium in Poland prepared for Euro 2012 the European Football Championships in 2012. Stadium with max. 42,000 capacity has the highest Elite class prestige certificate. This is the third ready stadium from the list of eight planned to be build in Poland and Ukraine until Euro 2012.

The Olympic National Sports Complex in Kyiv is currently around 77% finished, while the stadium in Lviv (western Ukraine) is 55% complete, according to Nazariy Yunyk, the head of the department for the preparation of stadiums, training centers and accommodation facilities at the National Agency on Preparations for EURO 2012 (UkrEuroInfraProject).

Stadium was underwent renovation for the final tournament of UEFA Euro 2012 final. It lasted two years: 2007 – 2009. Reconstructed part of the southern and eastern grandstand was built completely. Mentioned are also the roof and amendments were made aesthetic. With what remained of the old stadium and the main entrance colonnade. The facility was officially opened in 2009.