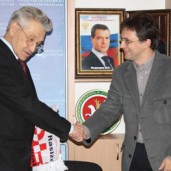 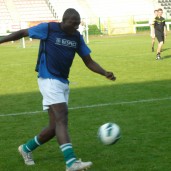 A new report from a Warsaw based anti-racism group documents the number of racist and discriminatory incidents in the host countries for the 2012 European Championships. The report called ‘Hateful’ has been produced by the ‘NEVER AGAIN’ Association in cooperation with Football Against Prejudices (Ukraine), as part of the FARE network Eastern European Monitoring Centre. It covers an 18 month period from September 2009 to March 2011, detailing 195 individual incidents involving football in Poland and Ukraine. The authors describe the numbers of incidents reported as ‘giving cause for concern’ […]

A Football Against Racism in Europe (FARE) consultation meeting took place in Kiev on 2 May. The informal meeting was well attended, which illustrates a strong interest in common activities against racism in football among Ukrainian FARE partners. It is also a testimony to the networking work in Ukraine conducted by the ‘NEVER AGAIN’ Association in frames of the FARE East European Development Project. Among others, the following groups and organizations were represented: the Football Against Prejudices coalition, African and Indian migrant communities, the Congress of National Minorities in Ukraine, […]