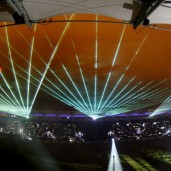 The final decisions have been taken, because each team is waiting for the December draw of the Euro 2012 groups, but there are indications that Swedes will live and train in Gdynia. Gdynia is one of the fastest developing cities in Poland, and, according to recent ranking of “Przekrój”, it is the leader among the best places to live in. Gdynia is famous for its cultural events of national importance or even of world importance, among which one should mention about Literary Award Gdynia Polish Film Festival, theater festival report […]