Last days were very workfull in Kiev. The national Ukraine stadium will change soon to one of the best stadiums in Europe. Old Kiev stadium: Old stadium demolishion: 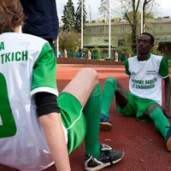 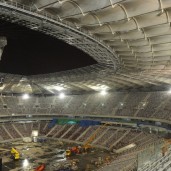 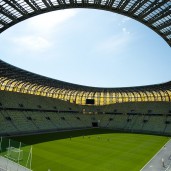 Construction has been completed on a stadium in Gdansk, northern Poland that is to be one of the venues for the Euro 2012 football championships, officials said on Tuesday. The stadium was given the green light nearly three weeks after its completion deadline of July 1. It will have its grand opening on August 6. Delays in building the Gdansk stadium forced officials to move a June 9 friendly between Poland and France to Warsaw. The stadium is one of four Polish venues that will host matches at Euro 2012, […]

The assembly of 4-thousand-ton steel roof construction began on Thursday on the construction site of the Wroclaw stadium for Euro 2012. Works will last until March 2011. As PAP was informed by Magdalena Malara, Wroclaw 2012 company spokeswoman, the first elements of the construction arrived to the capital of Lower Silesia in late September and then assembly started, including trusses, which are key elements of the roof construction and they will be arranged radially around the stadium. Their length is about 75 m. – Installation of roof trusses is logistically […]

The demolition of „Trojickyj” Shopping Centre near the Olympic Stadium in Kiev, which will be the main Euro 2012 arena, took only one week. In Monday, according to lack of money, the work stopped – announced the newspaper “Sport-ekspres na Ukrainie” in Tuesday. – If the demolition of the center has been really stopped, this can finally damage all our hopes (connected with organization of Euro 2012 by Ukraine) – said the chairman of the Ukrainian Federation of Football, quoted by the newspaper, Hryhorij Surkis.