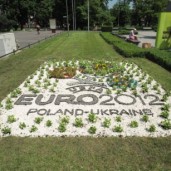 Common border checks, simplification of checks procedures, as well as increase of the safety of fans are joint projects of Kiev and Warsaw, which are being prepared for the EURO 2012. The projects are being prepared by internal affairs ministries in both countries in the framework of a working group of Euro 2012. An important project is to organize a joint Polish-Ukrainian border checks, which would facilitate the whole process of checks and shorten the waiting time. Dariusz Derewicz from the Department of Public Security said that such cooperation worked, […]

Two months before timeline dated in Schedule accepted by UEFA, draft Project of National stadium in Warsaw is ready. It Has to be a major arena of Football European Championship. They’ve projected roof of object curiously – It will be “wrappable” and hidden to special can which will hang centrally over the field. Roof will be not only “wrappable” but also heated. – Around this device, there will hang huge TV monitors, on which you’ll see zoom’s of players on the time of match Or soon plans of music. The […]

JSK Architekci company has shown a visualization and a miniature of the National Stadium. Its elevation refers to the national colours and imitates the waving Polish flag. It is so-called conceptional project. Zbigniew Pszczulny from JSK Architekci assured that the building fulfills all the UEFA requirements. The new stadium will be located at the existing embankment (strenghtened by stairs) of the 10th-Anniversary Stadium. The pitch will be located about nine meters higher than the existing one. Parkings for about 1700 cars will be build below the pitch and the access […]