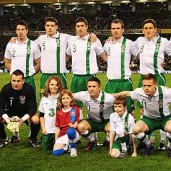 The team trained since 2008 by Giovanni Trapattoni only once had the honour to take part in the Championship of the old continent. In 1988, after the victory, a draw and a defeat it was eliminated from the tournament already after the group stage.

Ireland, 19 in FIFA rankings, had to accept in the qualifying games the superiority of Russia, and after ten meetings, having collected 21 points, qualified for the play-offs, where after the lucky draw they defeated Estonia 5-1 in the two-legged tie.

The captain, Robbie Keane, a striker currently hired from Aston Villa scored as many as 53 goals in 111 meetings of his national team. The strong point of the team will certainly be Chelsea midfielder Damien Duff, Shane Long, or a former Manchester United defender John O’Shea. The success for the Irish is the very promotion for the tournament.

The team, by the majority of fans condemned to be devoured in a group, will challenge the teams from Spain, Italy and Croatia. A greater chance of getting into the group and becoming a threat to the two favourites is given to the Croats, but the Irish have the heart to fight, and certainly will not want to play the role of the whipping boys.