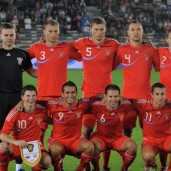 After a great performance at Euro 2008 and after reaching the semi-finals and eliminating the Dutch, among others, the appetites the Sborna fans have been growing. For Russia, it will be fourth start in the European Championship.

They will play in Group A and will face Greece, the Czech Republic and our representation of Poland. Dick Advocat’s team won in the qualifying rounds in a quite easy group with, inter alia, Ireland, Armenia and Slovakia, scoring 23 points in ten games. In addition to a set-back and a loss at home with the team from Slovakia, the Russians were playing well, winning seven matches and drawing two.

The team leader for several years has been Roman Pavlyuchenko, a Lokomotiv Moscow’s striker. In shooting goals he can count on Andrei Arshavin, Pavel Pogriebnyak, or Alexander Kerzhakov. The representation team of Russia will play their games in Wrocław and at the National Stadium in Warsaw. Russians are assumed to have the biggest chance from all the four teams to leave the group and play in the quarterfinals. It is proved by a high, twelfth place in the FIFA rankings, the eliminations won and a thrilling game at the last championship tournament.