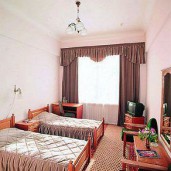 Ukrainian hoteliers are missing out on early bookings for Euro 2012 with reservation databases in host-city hotels still closed for the dates of the event, according to www.booked.net.

Less than 250 days from the kick-off of Europe’s top international soccer showcase almost all host-city hotel booking systems in Ukraine, which is co-hosting the tournament alongside Poland, remain closed.

Meanwhile, preparations for the 14th European Championship is continuing at pace across Ukraine.
Reconstruction of stadiums and key improvements to infrastructure is almost complete in the host-cities of Donetsk, Kharkiv, Lviv and the capital Kyiv for the June 8 to July 1, 2012 event, in
preparation for the largest influx of visitors in the nation’s history.

However, despite the expected boom in the number of tourists, with just nine months to go before competition starts hotels are not ready to seize booking opportunities.

A search of on-line hotel reservation website Booked.net’s database, alongside those of competitors, showed only a handful of the hotels in each city have made it possible to pre-book accommodation for the tournament.

Booked.net chief communications officer Jared Morgan said the lack of action coincided with precisely the time many football fans would be beginning to plan to attend the tournament.
It was also in stark contrast to the approach taken by hotels associated with other large scale events, he said.

“Take Oktoberfest for example, this year’s event is still running, but Booked.net is already taking Munich hotel bookings for next year.”

The fact Ukraine was relatively inexperienced in hosting large-scale events was potentially an issue, but hotels needed to begin thinking about being seen to be available, or some potential guests may look elsewhere, Morgan said.

A poll of hotels across the four host-cities conducted by Booked.net showed most had not considered making rooms available to guests during the tournament.
Anastasia Nezhura, who works in reservation department administration at Rus Hotel – a Kyiv hotel near the Olympiysky National Sports Complex – summarized the approach being taken by hotel management.

The hotel was not taking reservations for rooms in June and July 2012 because it was “too early”.
Rus staff would look at taking bookings at the end of this year, she said.