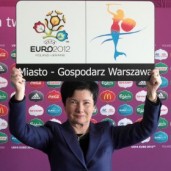 The capital of Poland may yet become the main city of the upcoming Euro 2012, told Sport-Express vice president of NCS Robert Voychizh responsible for the construction of the Warsaw Arena.

“Frankly, the Poles were very upset when UEFA decided to give the final of European Championship to Kiev. Of course, we took this decision. But still hope that’s still possible to change something. If Kiev will not have time to prepare the stadium in time, we are always ready replace it. ”

However, the general secretary Gianni Infantino, UEFA said: “In Kiev, everything will be ready in time, do not doubt it. ”

The opening of Warsaw’s stadium is scheduled for September this year, it will accommodate 58,000 spectators, its construction cost of 500 million euros.