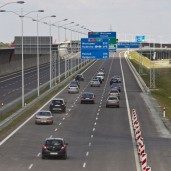 In the Wrocław Motorway Bypass there is the largest concrete bridge suspended to one pylon. The Rędziński Bridge is the record-holder in many architectural competitions:

Two independent multi-lane roadways will be suspended using 160 steel ropes with a total length of about 25 km. It is a unique solution that has not been used so far.

The total length of Wrocław Motorway Bypass amounts to over 35 km and the investment value exceeds 4 billion PLN.